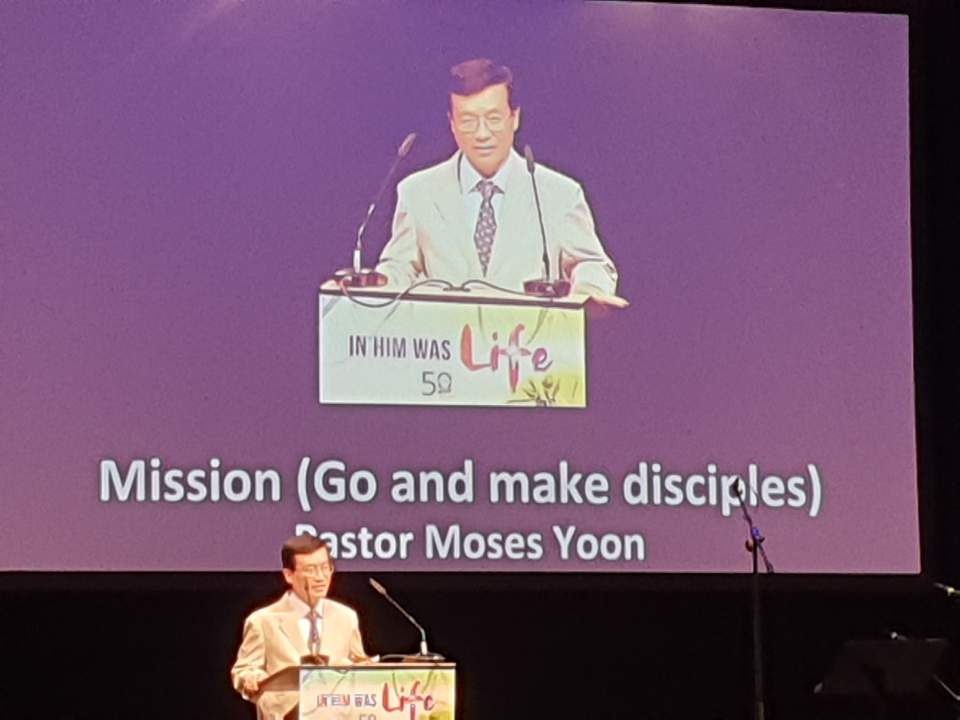 Key Verse 28:19, “Therefore go and make disciples of all nations, baptising them in the name of the Father and of the Son and of the Holy Spirit.”

After the Resurrection, Jesus resided on earth for a period of over forty days. During those days, Jesus showed himself to the disciples and gave them many convincing proofs that he was alive. Yet amazingly, St. Matthew, the writer of this gospel, records just two things in chapter 28: Jesus showing himself to the women; and Jesus commanding his disciples to make disciples. Why is this? It is because Matthew wanted to make it clear that we should not be distracted by other issues but know the key point about what Jesus really wanted us to do. May God help us to accept Jesus' supreme command and obey.

Look at verse 16. “Then the eleven disciples went to Galilee, to the mountain where Jesus had told them to go.” The eleven disciples had been in Jerusalem. In the past, they wanted to see Jesus establish his Messianic kingdom. But he was arrested and crucified like a criminal. The death of Jesus was traumatic for them. They deserted Jesus and ran away. For them, Jerusalem was a city of failure. The religious leaders were searching for Jesus’ disciples. The disciples were scared and fearful. Jesus had said that he would meet them in Galilee after his Resurrection (Mt 26:32). Jesus wanted to meet and give them a new start where he first had called them three years ago.

The disciples went to the mountain and there they met the risen Jesus. When they saw Jesus what did they do? Look at verse 17. “When they saw him, they worshipped him; but some doubted.” When they saw Jesus they worshipped him. Probably, they knelt down before him and bowed down to him. That they worshipped him means they accepted Jesus as God. However, verse 17b says that some doubted. This does not necessarily mean that they did not accept Jesus' Resurrection. They saw the risen Jesus and believed. However, his Resurrection was too supernatural for them to fully accept with their minds. So, some of them remained confused.

In spite of their spiritual condition, Jesus gives them his last commission. Look at verse 18. ‘“Then Jesus came to them and said, ‘All authority in heaven and on earth has been given to me.’” In the Garden of Eden, the devil tempted the first man Adam to sin against God. Because of the trespass of this one man, death came into the world and reigned over all men (Ro 5:14, 17). No one could challenge the power of death. All came under the power of death and were subjected to frustration. However, Jesus, through his Resurrection, conquered death and freed all men from its slavery. God exalted Jesus to the highest place in the whole universe (Php 2:10-14). The risen Jesus is the ruler and judge of the living and the dead. He has all authority in heaven and on earth. He is the King of kings and Lord of lords.

Here we learn the reason why we must obey Jesus. It is because Jesus has all authority. He has the power to deliver us from the grip of Satan. He has the absolute authority to forgive our sin and give us eternal life. He has the authority to condemn those who do not submit themselves to him. In the world, the authority of a king or queen is temporal. But Jesus' authority is absolute and everlasting. Therefore, Jesus is forever worthy of our full submission and obedience.

Look at verses 19-20a. “Therefore go and make disciples of all nations, baptising them in the name of the Father and of the Son and of the Holy Spirit, teaching them to obey everything I have commanded you.” If we read this verse carefully we will find that this is just one sentence with two verbs: “go” and “make”. We should “go” in order to “make” disciples. So, the key words of Jesus' supreme command are “make disciples”. Who are the disciples? A disciple is a learner. The word has the same root with the word “discipline”. A disciple is the one who learns and receives discipline. Whose disciples should we make? Our disciples? The disciples of our ministry? No. We must make Jesus' disciples. We must make disciples who learn from Jesus and grow to be like Jesus. Disciples who imitate Jesus' character and his life. Jesus did not command them just to raise many converts but to make disciples.

The word “make” is a strong word. A sculptor cuts and trims a marble block to make a great work of art. Michelangelo is called the master of sculpture. If a rough marble block came across in his hands, it was made into a beautiful piece. To make disciples means to teach, train, and discipline, so that they can grow. No one can become a disciple by himself just as a rough stone cannot make itself into a great piece. In general, people do not like to be told what to do. They do not like to be made. They think discipline is a violation of human rights. Yet spiritual discipline is essential to making disciples. There are two elements in spiritual discipline: the first, a goal; and second, consistent support or encouragement to reach the goal. It is not easy to help people to grow into disciples of Jesus. In order to make disciples we must first love our students until we have a relationship of trust with them. It normally takes more than 3 or 4 years to gain trust from students. Based on the trusting and loving relationship, we can help our students grow into disciples.

How can we make disciples? In verses 19b-20a, Jesus tells us two specific ways. First, we should baptise them in the name of the Father and of the Son and of the Holy Spirit. What is baptism? Baptism is a ceremony where someone publicly declares his faith in Jesus Christ, that he accepts Jesus as his personal Saviour. So what is important in this command is to teach the gospel until one comes to know Jesus very personally and accepts Jesus as his Saviour. Then they can be baptised. So, we should first teach our Bible students about Jesus and his gospel until they confess Jesus is their Saviour.

Second, we should teach them to obey everything Jesus commanded. In giving his world mission command, why didn't Jesus just tell his disciples, “Reach out to as many people as possible and evangelize them”? Instead he said, “go and make disciples of all nations.” This is because disciple-making is the most effective way in reaching out to all people, in the long term. It is the most reliable and quickest way, and it is God’s wisdom. Disciple-making appears slow, unproductive, and time and energy consuming. Yet we must believe that the best way to reach out to the whole world in time is to make a disciple at a time who can make another disciple.

Making disciples is not a slogan of UBF. It is Jesus' supreme command. Even though we may obey Jesus’ other commands, if we do not obey making disciples we cannot please Jesus. All our lives, our activities have meaning when they are lived, done for world mission by making disciples. May God help us not to lose our focus but keep on making disciples of Jesus. In particular, we received a special calling from God to make disciples among teenagers and college students. In the light of Christian history over the last 2,000 years, our ministry seems to be a unique community with the focus of campus mission for all of its members - whether you are a child or a college student, or a senior citizen. Our prayer is that we would maintain this direction from above until our Lord Jesus comes again.

Look at verse 20b. “And surely I am with you always, to the very end of the age.” When the disciples heard the great commission, they must have been heavily burdened. These eleven humble men had never thought of a world mission. But now they were commissioned to go to out into all nations and deliver the message of Jesus’ death and Resurrection. But they would not be going by themselves. The risen Jesus would be with them wherever they went. In fact, it was not the disciples who would make disciples of Jesus. Jesus would do the job! Therefore, our faith that Jesus is with us is very important. When we obey his world mission command we are under God’s care. To God those who obey his world mission command are the most precious because God earnestly wants the world to be saved from their sin. May God help us to obey Jesus’ world mission command with all our hearts and raise up 100,000 disciple making missionaries by 2041.

In conclusion, Jesus died on the Cross and rose again from the dead. Through his resurrection he was declared as the King of kings and Lord of lords. Jesus who has all authority in heaven and on earth commands us. “Therefore go and make disciples of all nations.” May God help each of us to obey Jesus’ great commission with all our heart. Amen!